The production of each chemical monograph in the series began with the baseline information in the appropriate ATSDR Toxicological Profile. Information on the chemical hazard was then updated in the areas of environmental fate, exposure pathways, toxicokinetics, physiologic effects, analytical methods, and regulatory status. An Information Specialist performed on-line computer searches and retrieved those journal articles and government publications deemed important by qualified staff. Technical writers read, interpret, and synthesize the relevant articles.
To obtain the latest information concerning current medicine and practice, DeLima Associates contracted with physicians throughout the country to write portions of each monograph. The Guest Contributors typically are physicians on the staff of teaching hospitals or employed by public health departments; they are experts in the human toxicology of the specified chemical. When drafts were received from these authors according to a prearranged schedule, the sections were restructured and integrated into the document by the writers at DeLima Associates using consensus guidelines on format and tone. Challenge questions and answers were included to extend the facts of the case study or illustrate important teaching principles. The initial draft of the CSEM was  then sent for internal ATSDR review and for review by a Guest Editor.

In addition to a pretest and post-test, the comments and suggestions from the committee members were incorporated in a provisional final draft. This draft was distributed to the meeting participants, the Guest Contributor, and the Guest Editor for final review. Comments from these persons were again incorporated resulting in the final draft, which was delivered to ATSDR in camera-ready form.

The process, including thorough data gathering, preparation of a referenced document, peer review, and field testing, has resulted in a product that has been well received by clinicians, nurses, industrial hygienists, and other health-care providers. To date, two issues of the CSEMs (lead, nitrates) have been distributed by the Academy of Pediatrics to over 30,000 members; three issues (vinyl chloride, PCBs, and methylene chloride) have been published in the Journal of Clinical Toxicology; fifteen issues appeared in condensed form in the American Family Physician. In addition, about 10,000 copies of each issue have been printed for general distribution, and at least one foreign government has expressed interest in translating the series for use in that country. Thousands of health-care workers have received continuing medical education (CME) credits or continuing education units by completing and submitting the post-test to ATSDR.
The following Case Studies developed by DeLima Associates have been published: 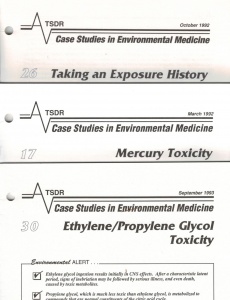